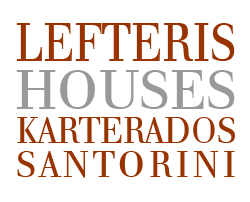 The traditional village of Karterados is built beside a stream in a ravine. Its existence is recorded back to the 17th century. The original dwellings are cave houses built deep into the rock face. During the 19th century, it was one of the large sea captain villages on the island. The name of the village comes from the Greek word 'karteri' = waiting point or ambush point, probably because ambushes were set to trap marauding pirates.

The village square has a traditional windmill and a memorial plaque to commemorate those who died in the Second World War. On the left hand side as you leave the square, the road curves sharply to the left, and there you will discover the 'Steps of Galaios'. Barely visible from the main road is a small neighbourhood of cobbled streets, Captains houses and cave houses built into the rock.
The shops are open all year round, since Karterados also has a considerable number of permanent residents.